From FIThydrowiki
Revision as of 13:58, 6 July 2020 by Bendikhansen (talk | contribs)
(diff) ← Older revision | Latest revision (diff) | Newer revision → (diff)
Jump to navigation Jump to search
This technology has been enhanced in the FIThydro project! See Innovative technologies from FIThydro for a complete list. 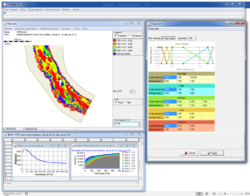 CASiMiR is a software package with different modules aiming to assess the impacts of human measures on river ecology.

CASiMiR-Fish is a habitat suitability model that imports results of 2D hydrodynamic modelling and relates them to the requirements of aquatic species, such as different life stages of fish species, macroinvertebrates or macrophytes. The model delivers quantitative information on the quality and availability of hydro-morphological habitats and their changes, caused by changes in hydrology (temporal flow features), hydraulics (spatial flow feature) and morphology (Figure 1). In contrast to other habitat suitability models, it is based on a multivariate approach that is able to integrate rules for the description of habitat requirements. These rules are generated based on data evaluation and/or ecological expertise.

CASiMiR-Hydropeaking is a model able to process unsteady flow data for habitat risk assessment. Dynamic parameters as ramping rates (water level changes over time) are used to assess the stranding risk or drift risk for young fish during rapidly changing flows that occur in rivers under hydropeaking impact (Figure 2). Additionally, the habitat persistence, as an indicator for the sustainability of habitats for organisms with restricted mobility (larvae, macroinvertebrates), can be quantified and assessed for different scenarios of turbine operation and morphological mitigation.

CASiMiR-Migration is an agent-based model developed within FITHYDRO. It is used to assess the effectiveness of the attraction flow downstream of fish passes. It is based on the evaluation of hydraulic features, such as flow velocity-magnitude, -direction and -gradient as well as morphological features such as river bottom gradients, vicinity of flow obstacles to predict favorable and unfavorable swimming paths for migratory fish (Figure 3).

CASiMiR integrates interfaces for several 2D hydrodynamic models such as Hydro-AS_2D, SRH, BASEMENT, FLUMEN, River2D. The model has been applied in rivers of most different dimensions, types and stretches with lengths between several 10 m to sections of several dozens of kilometers (Figure 4).

CASiMiR is unique in that it makes use of physical and biological parameters through the application of expert knowledge using fuzzy logic-based rule systems, but can also use the standard preference function method as well. The main advantages of using habitat simulation models are:

Base versions of CASiMiR are free for download under http://www.casimir-software.de. Advanced versions can be purchased via mailbox@sjeweb.de. Scientific and commercial licenses are available.