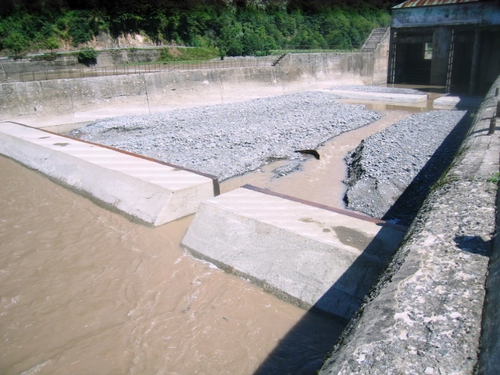 Figure 1: Sediments trapped in front of intake to a power plant in the Adjaristsqali River, Georgia.

Sediments can be classified according to their size:

Coarse sediments compose river beds, bars, and banks. They act as a barrier against river incision and bank erosion, and they serve as shelter and spawning habitats for aquatic species. Fine sediments play a major role for the transport of nutrients through the river by absorbing nutrients onto clay. Their abstraction may result in significant ecological impacts. Fine sediments, when they are suspended in water, increase water turbidity, but they can also deposit between gravels, and clog interstitial shelter habitats, or affect spawning areas.

Dams act as a barrier in the hydrological system as they interrupt the continuity of sediment transport through rivers systems. Sediments are trapped in reservoirs and reduce reservoir capacity, impacting the sustainability of the reservoirs, in terms of power production and water supply. It also induces a deficit of sediments downstream reservoirs leading to morphological and ecological consequences in the downstream rivers.

On the opposite, some rivers face high to extreme levels of sediments delivered to and deposited to the riverbed. Sediments deposition is a natural process occurring in rivers, which depends on river topography, water velocity among other factors that can be modified by human activities. Change in land-use has particularly impacted the sediment cycle by accelerating the delivery of sediment to rivers and increasing the quantity of smaller particle sizes. Excess of sediments directly affects the habitat quality for biotic communities as explained above.

In dammed rivers, sedimentation management should be anticipated already in the planning phase of dam and reservoir construction. During the design phase an extensive analysis of sedimentation processes should be carried out, including estimation of sediment yields entering the reservoir, projections of future sedimentation load, calculation of sediment trapping rate in the reservoir and simulation of the rivers' sediment transport capacity. In rivers with modified land-use in the surrounding catchment, sediment delivery should also be calculated by measurements and modelling and be prevented with mitigation measures.

Mitigation measures can also be classified according to their location in the river system (reservoir, dam, river) and the issues they address (loss of reservoir capacity, downstream, starvation, excess of sediments in the river). Some measures, like flushing, sluicing, bypass, etc., have been specifically designed to address the issue of reservoir sedimentation and the induced loss of capacity storage. However, if correctly designed and planned, these measures can contribute to balance the lack of sediments in downstream rivers.

The measures only addressing loss of reservoir storage capacity, without mitigating lack of sediments load downstream of dams are not considered as an improvement measure with respect to ecological conditions in rivers. Hence, they will not be addressed in the FIThydro project.

The various measures to mitigate issues concerning sediments are listed below.