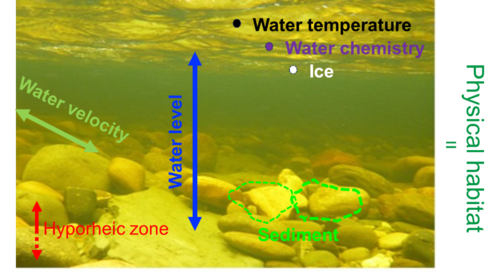 The habitat is the natural home or environment of an animal, plant, or other organism. In rivers, the physical habitat is shaped by the morphology of the river, the flow and flow-related components, and physio-chemical properties of the water. Figure 1 indicates central physical factors affecting the physical habitat of fish in running waters. The understanding of processes affecting these factors is central in understanding how hydropower operations impact rivers, and also in designing efficient mitigating measures.

Flow is the single-most important determinant of the physical habitat in rivers, and several of the properties are directly affected by changes in flow, such as water velocities and water level. The rate of heating, cooling and freezing of the water is dependent on the flow in the river, along with a set of other factors, and the water chemistry is to a degree determined by the volumes of water, e.g. by diluting pollutants. The flow in the river also affects the direction and rate of exchange of water between the rivers and the sub-surface, i.e. the hyporheic zone. While most of the described factors change more or less instantly as the volume of flow is changed, the composition of sediments and substrate qualities as habitat will change far slower. These factors are also determined by changes in transport of sediments from upstream areas (sediment connectivity) and the changes in habitat qualities related to substrate must be considered long-term changes due to regulation, the hydropower plant and associated infrastructure.

The impacts of the regulated rivers system will vary very much across the regulated system, and the mitigating measures that must be put in place will depend on how the hydrology of the rivers stretches under consideration are affected. As such, a clear understanding of which parts of the system that get dramatically reduced flows (bypass sections), which parts that experience a change in seasonality of the flow, and which parts that possibly experience higher flows (in the case of water transfer), and variants of these, must be thoroughly assessed. Some areas downstream the outlet of a power plants might be exposed to rapid and frequent changes in flow due to hydro-peaking operations, which call for another set of mitigating measures. In a process of finding the best single or combination of measures, an understand of the changes in flow introduced by the hydropower regulation is hence prerequisite.

In the following, a set of traditional, new and innovative measures to improve the habitat and flow conditions in rivers affected by hydropower regulations are described. In the last part of each section, examples of successful implementation of measures are presented. It should be underlined that habitat and flow are not independent of each other, as for instance measures aimed at improving the flow conditions also affect the habitat (e.g. water depth and velocities), and also migration and possibly sediment connectivity. As such, one measure can directly, or indirectly, improve the status of one or more of the defined problem types.

The measures in the following sub-sections are presented separately. In a real situation, a combination of measures would be most cost-efficient. Sometimes one specific measure would have only a limited effect unless another measure is put in place at the same time, i.e. a set of measures being dependent on each other.

The various measures to mitigate issues concerning habitat are listed below.