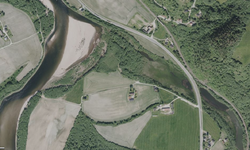 Figure 1: The main river Gaula in central Norway flowing to the left in the photo, with parts of the old braiding river de-connected from the free-flowing section, e.g. to right of the highway, and spots here and there in the landscape closer to the main river.

Areas outside the main river channel can be important nursery grounds and habitats for juvenile fish, also providing resting and survival areas during periods of hydro-peaking operations and low flow. Such areas can be oxbows, sidearms, tributaries or other areas outside the main channel. These areas can be disconnected from the main channel for several reasons, such as erosion and flood protection creating barriers for migration (lateral connectivity), incision of the main channel due to altered sediment regime or channelization or other reasons for disconnection of oxbows, sidearms and other areas outside the main channel. Permanent changes in flow regimes can also reduce the connectivity, making suitable habitats for fish less accessible. In some cases, establishment of areas for fish can be an important measure to extend the living areas.

Hydraulic simulation models can be valuable tools in order to assess under what flow conditions the different areas are accessible for species with various swimming and jumping capabilities and habitat requirements. With these tools different flow regimes, such as typical low flow during winter and summer, water covered areas and connectivity can be analysed. Examples of hydraulic tools are HEC-RAS and various tools from commercial vendors such as DHI.

Water-covered areas can also simply be mapped directly under various flows, either by direct observations in the field, or for instance by use of drones equipped with cameras or possibly by use satellite images.

Making areas outside the main channel available will often require use of machinery in the river. In some cases, the work would be to open access to parts of the rivers that have earlier been accessible, such as old side-channels, oxbows, tributaries or similar, by lowering thresholds in the river. A field inspection will reveal the potential for restoration of these areas. The actual work will require dumpers and access to the parts to modify. It might also be needed to add new gravel or stones to the areas opened up, or to replace the substrate. It should be considered during what flows these off-channels areas should be flooded with water, i.e. having a permanent connection to the main river, or for instance only during floods of certain return periods.

Habitat measures in regulated rivers must often be maintained unless the natural functions related to flow and sediments are restored, such as flood events and connectivity of the sediments. This is also the case for restoration of off-channel areas, or other areas made accessible. The frequency of the maintenance will be very site-specific.