Figure 2: First run of a structure from motion evaluation in the lab of NTNU. The blue field indicates the camera position (Kordula Schwarzwälder, NTNU). 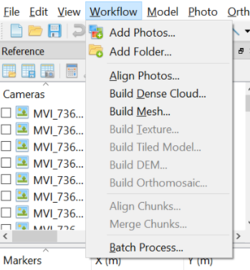 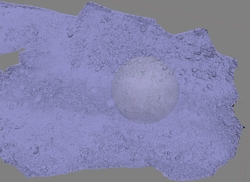 Figure 4: Mesh generated from SfM from a section of the residual flow reach of Anundsjø (Kordula Schwarzwälder, NTNU).

The technique of structure from motion was developed for the video-game industry to allow fast and easy 3D detection and evaluation of bodies. With this technique it is possible, based on pictures of an object taken with a camera, to combine these pictures. There are several approaches to generate a 3D model from SfM. In incremental SFM (Schönberger & Frahm 2016) camera poses are solved and added one by one. In global SFM (Govindu 2001) the poses of all cameras are solved at the same time.

The best result can be achieved when taking pictures from as many positions as possible 360 degree around the object of interest. However, this is not possible for rivers. Depending on the riverbank vegetation and the specific location of each river (such as located in a canyon etc.) only a flight directly above, but with no relevant angle to the sides, might be possible (Figure 1). The same problem might appear when using the technique in the lab (Figure 2).

For a sufficient positioning accuracy of the results, at least a camera with a high-quality GPS sensor needs to be used. The use of targets or even coded targets to allow a more accurate positioning would be more favourable, however. Without such an accurate positioning of the pictures in the space, the result would not be correct as the cameras could not be located correctly in dependency to each other. Targets on the ground, especially for field measurements, are highly recommended. The position of the targets can be measured with a GPS and the targets can be redetected later in the pictures.

Depending on the software used this process of “re-finding” can be done automatically or needs to be done manually. In general are there different types of software available, commercial and non-commercial ones. As there is a very fast development and most non-commercial tools need a lot of experience with picture modifications etc. it is recommended, despite the costs, to use a commercial one such as Agisoft Photoscan for instance. In this software, the user can follow relatively easy the workflow, provided by the program (Figure 3), to produce a DEM. It further offers a quite comprehensive manual.

As for other picture-based evaluation methods, the data processing is the most demanding part of the measurement. When starting with the measurements in the field, it is highly recommended to use targets. The rough workflow is then as follows:

Once the measurements are done the evaluation is the most crucial point. Depending on the number of pictures evaluated the result quality de- or increases and in a reverse way the computer performance and power needed in- or decreases (Figure 4).

The highest cost is the software license in case a commercial product is used.