Fish lifts, screws, locks, and others 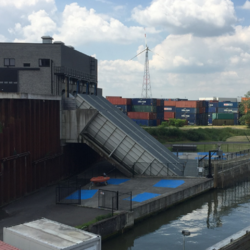 Locks for fish have, in principle, the same function as locks for ships, whereas lifts for fish resemble regular lifts in houses. Both methods require technically bulky constructions. They are both costly and operationally demanding but use relatively little water. The lift solution has been used especially at high altitude differences and little available construction area. In the locks, migrant fish is led into a chamber, then the entrance closes and the water level increases until it is on the same level as the above barrier. Then an outlet opens up and the fish can swim out. In lifts, fish are led and caught in pools that are then raised and emptied into the water above the barrier. Fish pumps have also been used to transport fish. The solutions are often selective since one and the same capture device rarely works for all occurring species and age classes. In addition, the plant itself has a deterrent effect on some fish. In England, Germany and France, the functionalities of such plants have been considered as low, as only a small proportion of the fish found their way into the pump (Armstrong et al 2010). We know there is only one such example in Norway; a sluice called "fishing lift" in the Vegård river. Salmon has migrated through this system, but the effectiveness is considered uncertain and smaller than expected.

Archimedes screws turbines (AST) and propeller pumps are additional solutions for upstream transportations fish. Studies from Belgium show that mortality rates are high for all fish species studied. Archimedes screws are less harmful to fish populations than propeller pumps, however in contrast with what is often thought, they do cause significant fish mortality (Buysse et al. 2015). Other studies suggest that ASTs can be less harmful and effective at low head dams (< 5 m)

The Whooshh Fish Passage System (WFPS) uses a pressurized tube to transport fish over dams of any height. It can readily be adapted to local requirements and a number of different entrances and tubes can be constructed to facility migration of various species. The WFPS also uses multiple cameras to scan incoming fish, which can be used to select which species are allowed to migrate upstream (e.g. excluding invasive species, or potentially even identifying wild vs. hatchery fish). The modular structure and use of cameras and software to select individuals for migration also allow adaptation of the system to changing requirements, which is challenging or impossible with most traditional solutions.

Planning of fish lifts, screws and locks are strongly dependent on the product and technical solution. The specific site also plays an important role since, for instance, locks might be part of an existing navigation system. Specific attention must be paid on fish behaviour and how to guide fish into the system. Pre-studies with radio or acoustic telemetry might be required and planning will need to cover mapping of the hydropower plant and surrounding river reaches and banks.

The implementation of a fish lift, screw or lock solution must be conducted in close collaboration with manufacturer and by use of fish migration experts on both biology and engineering.

The maintenance and monitoring of a fish lift, screw or lock solution must be conducted in close collaboration with manufacturer and by use of fish migration experts on both biology and engineering.

Please note that the certainty of effect and TRL will vary depending on the technology that is used. This list shows the lowest among the technologies.