Figure 1: (a) BDS sensor dimensions and (b) box with prototype sensors (source: Centre for Biorobotics, TUT). 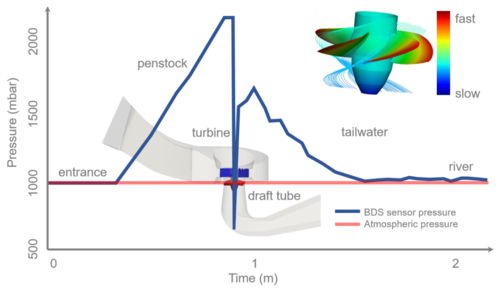 Figure 2: (a) Conceptual sketch of the vortex tube functionality and (b) vortex tube outlet at HPP Schiffmühle (source: VAW).

Developed by: Centre for Biorobotics, Tallinn University of Technology

The BDS sensor housing consists of two POM plastic end caps and a 4 cm outer diameter polycarbonate plastic tube, with a total length of 14 cm, and mass of 150 g (Figure 1). Neutral buoyancy of the BDS is achieved by estimating the water temperature during deployment (±5 °C) and manually adjusting the length of the sensor by screwing the flat end cap inwards or outwards to modify the total sensor volume. Each hemispherical end cap contains three digital total pressure transducers (MS5837-2BA, TE Connectivity, Switzerland) which have a sensitivity of 0.0021 kPa (0.21 mm water column) and are linearly rated for 25 m of water depth, and can be used up to 45 m of water depth using a non-linear correction based on laboratory calibration. Each pressure transducer is equipped with its own on-chip temperature sensor, allowing for all pressure readings to include real-time temperature correction using a 2nd order algorithm. All sensors were tested against a HOBO reference pressure sensor under static and dynamic conditions in a laboratory barochamber. The BDS employs a high-speed digital sampling architecture with a 400 kHz clock rate.

All BDS units are equipped with an atmospheric auto-calibration algorithm. All three transducers are set to a default value of 100 kPa (1000 mbar) at local atmosphere. All sensors are therefore auto-calibrated to local changes in atmospheric pressure, which occur during the day, directly before each field deployment. This feature removes the necessity of manually correcting pressure sensor readings.

The BDS units use three pressure sensors for two reasons. The first is to ensure repeatable field measurements with increased fault tolerance. The BDS uses Triple Modular Redundancy (TMR), by including a pressure sensor array in lieu of a single pressure sensor, whose error and failure cannot be controlled during deployment (Reddy et al., 2007). The second is that multiple sensors allow for the detection of pressure gradients during passage, which may correspond to regions of high shear.

The sensors are turned on by activating the magnetic switch. Afterwards, they are deployed into the water, upstream of the hydropower plant, from where they travel through the hydraulic circuit (Figure 2). Balloon tags inflate after the downstream decompression, bringing the sensors to the surface, where they are recovered by boat. The data are saved as text files and can be imported into Excel, R, MATLAB and other commonly used software for processing and visualization.

The cost of each sensor is 500 EUR. Tests at 5 case study sites have shown that an average of 120 data sets per day can be recovered for each hydropower plant operational scenario (e.g. full load, ½ load).