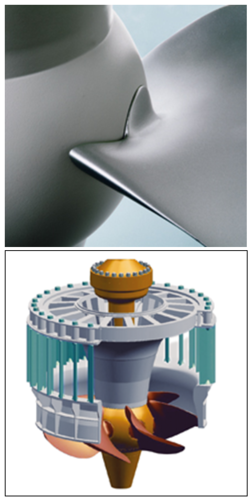 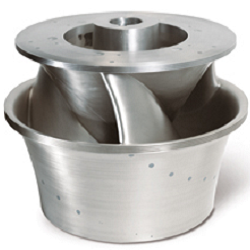 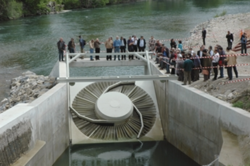 The passage of downstream migrant fish into turbines of hydropower plants can cause mortalities. One possibility to reduce/avoid mortality is to install fish-friendly turbines. Fish-friendly turbines are optimized in geometry and operation so as to avoid damage to fish as much as possible. Differences from ordinary turbines are low rotational speed, large diameter and small spaces between turbine blades and turbine housing (Ebel 2013). Because of higher investment costs, fish-friendly turbines are relatively rarely built. However, there are examples of conventional turbines with reduced spacing between minimum gap runner and different designs (Alden 2008, Meijnen and Grünig 2013, Fisher et al. 2000).

Several types of turbine can be used. Their qualification as fish-friendly depends on their mechanical and operational characteristics.

Developments of Minimum Gap Runner (MGR; Kaplan) were performed and are still underway to modify the design of large Kaplan turbines (several hundreds of m3/s and heads between 10 and 25 m), essentially on the Columbia and Snake River dams (west coast of USA). For example: installation of advanced turbines Minimum Gap Runner (MGR) at Bonneville Dam (replacement of the 10 units from 1998 to 2010), and at Wanapum Dam ( (NAI, 2000); (Dauble, et al., 2007); (USACE, 2013)), projects of turbine replacement at Ice Harbor Dam (Ahmann, et al., 2015) and at Priest Rapid Dam. The runner blades are designed in such way that there is only a minimal gap between the blade edges and the hub or outer periphery/ This can be achieved if the blades of the minimum gap runners are exactly matched to the spherical hub and outer periphery. The advantages of MGRs over the conventional Kaplan turbines are (1) the enhancement of overall turbine efficiency and (2) increased fish survival rate from 88% to 95% due to decreased rapid and extreme pressure changes, shear stress, turbulence and blade strike (Albayrak, et al., 2014).

A low pressure turbine has been developed by Pentair Fairbanks Nijhuis and FishFlow Innovations. The geometry of the runner blades is designed to create optimal flow conditions for the fish. By using a small number of blades and also a helical shape; the probability of collision with the fish is reduced. First test on a down-scaled model (1:5; discharge of 3 m3/s and head of 2 m), alongside pumping station Leeghwater at Buitenkaag, the Netherlands, show no mortality on small eels (mean length around 420mm; (Winter, et al., 2012)). However, part of the eels showed minor injuries. Another test, still on down-scaled model (1:16; discharge of 0.7-0.8 m3/s and head of 0.51-0.82 m) installed near the village of Maurik at the Nederrijn, shows low mortalities on pike perch (2-6%; mean length around 170 mm) and trout (0-1%; mean length around 170 mm), and no mortality or damages on eels (mean length around 250 mm) (Vriese, 2015). These results are promising for prototype turbines which can be installed as turbine, pump and tidal station (bi-directional turbine), with low head (< 6 m) and high discharge (up to several hundreds of m3/s).

Very-Low Head (VLH) turbines are suitable for discharges from 10 to 27 m3/s and for very small heights (H=1.4 – 3.2 m). The turbine is principally a Kaplan turbine with fixed wicket gates. The turbine is typically installed at a vertical angle of 45° to the main flow direction. The turbine is favorable with regard to the fish-passage, due to relatively low peripheral velocities, low minimum pressure and pressure gradients and small velocity gradients through shear zones. Tests on the first prototype of VLH show still residual mortalities on smolts and eels due to pinch points between the blade's extremities and the mantle (Ecogea (2008a) (2008b)). A second generation of runners was developed and tested showing no mortality for smolts (232 mm) and eels (760 mm); there are still some mortalities on large salmonids like kelts (1-4% depending on the blade opening for fish of 482 mm) ( (Ecogea, 2011), (Ecogea, 2013)).

Archimedes or hydrodynamic screws are developed by several companies for discharge from hundreds of l/s to several m3/s (up to 7 m3/s to our knowledge), and heads between 1 and 10 m. Depending on the type of srex and their design, there is a risk of damage due to spaces and sharp edges (Ebel 2013). For example, at Ham Power Station in the Albert Canal (11m head) 50-70% of the fish were damaged (Johan Coeck, pers.comm.), which was attributed to both the design and the pressure altitude. Depending on the screw length, the screw-axis can bend and create significant gaps between the screw and the housing, thereby causing fish damage. Archimedes screws with rotating mantle can overcome the issue of gaps, but require higher technical efforts and respective costs. However, several tests, notably performed at Höxter on the Nethe River (Germany; (Späh, 2001)), at the Hooidonkse Mill (Netherlands; (Merkx, et al., 2007)) and on the Dart and Derwent Rivers (UK; (Fishtek, 2007), (Fishtek, 2008), (Fishtek, 2009)) showed that there is very low or no damage to various species, including smolts, kelts and eels, if some precautions are respected (Environment Agency, 2012):

A further development of the hydropower screw that functions for down- and upstream migration is the Archimedes double screw. This uses a part of the energy to pump water and fish upstream in the inner screw, which has no moving parts. Monitoring of this type of hydropower screw has in part not shown damage to migrating and migrating fish in the Grigull study (2015).

Fish-friendly turbines are planned by the manufacturer, instead of conventional turbine.

The installation of fish-friendly turbine is mainly implemented for new plants. At existing plant, it’s generally difficult to replace a conventional turbine by a fish-friendly one, as it requires huge modifications of structure.

Fish mortality through turbine can be monitored in situ thanks to injection of fishes in the turbines.