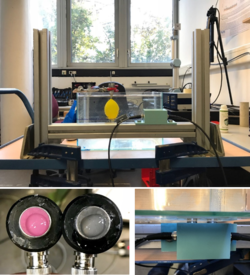 3D sensorless, ultrasonic fish tracking originates from an idea at Technical University of Munich. A European patent has been applied. During the FIThydro project the TRL level of the device has been raised and the technology has been demonstrated in a relevant environment.

The device (Figure 1) works without tagging fish and is similar to 3D tomographic imaging. It detects fish in rivers with high spatial and temporal resolution over a distance of a couple of hundred meters. Ultra-sonic transducers (receivers and emitters) are positioned in the water. When one transducer emits the others receive the signal. Emitting and receiving cycles around the devices with high frequency. As the resolution is in the range of only a few centimetres it is expected to measure the length of fish and even determine the fish species by the shape of the fish bladder.

The device can be used to detect sensorless fish in 3D. This cannot only be used to track fish in 3D but also to adapt operation of a hydropower plant to the needs of migrating fish. During the FIThydro project the TRL level needs to be raised from TRL4 to TRL5. So far, only first results are available and they show good potential. However, there is still a long way to go for a first prototype application in real rivers.