This technology has been developed in the FIThydro project! See Innovative technologies from FIThydro for a complete list. 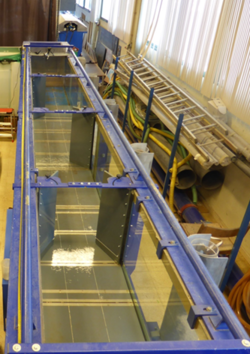 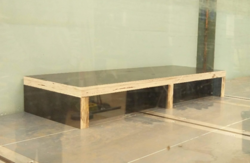 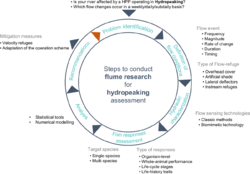 Figure 4: Circular flow chart displaying a potential sequence of steps to study the impacts of hydropeaking in flume conditions and to propose mitigation measures accordingly. Adapted from Costa et al. (2019).

The solution consists of fish flow-refuges to be deployed in rivers affected by hydropeaking. The design of this solution was based on the analysis of fish responses (blood physiology and movement behaviour) in relation to changing flow events that mimicked hydropeaking conditions in rivers. Diverse flow-events changing in frequency, magnitude, duration and rate of change and flow-refuges were tested. Fish responses were quantified to effectively measure the utility of the structures as flow-refuges for fish. The mitigation measures here presented are lateral refuges, specifically lateral deflectors and overhead structures (Figure 1 and 2), which exhibited the highest use rates. The material, dimensions, number and position in the flume (Figure 3) were selected according to 1) material resistance and ability to mimic natural refuges, 2) species-specific traits, and 3) previous research conducted for other fish species.

To design flow-refuges for fish as mitigation measures to hydropeaking, it is necessary to understand the effects of rapid flow fluctuations on fish and which variations in flow are causing those effects. A promising approach is to simulate the flow events occurring in hydropeaking rivers in artificial flumes. To examine the potential effects of hydropeaking and to propose flow-refuges as mitigation solutions, a series of steps that incorporate multiple disciplines (Figure 4) should be adopted. These steps are complementary and not mutually exclusive; for example, the selection of the target species dictates the selection of the flow-event and type of flow-refuge (Figure 4).

First, it is necessary to identify the flow changes (flow rate, duration, frequency, rate of change and timing) that occur in rivers affected by hydropeaking and adapt it to flume conditions. The peak discharges, frequency and ramping rates to be tested can be adapted during the experiments according to the findings of each trial.

The design of potential low-refuges has also to consider the characteristics of the flume. It is preferable that the flume has a bottom adequate to attach structures of different shapes, sizes and material. For the design of the presented flow-refuges the trials were conducted at an indoor flume (8.00 m x 0.70 m x 0.80 m), constructed on a steel frame with glass panels on both sides, with a usable area for fish that was limited by two perforated metal panels creating a 6.5 m long-reach. The lateral deflectors consisted of vertical PVC flashboards (0.30 m x 0.76 m x 0.015 m) attached to the flume bottom to mimic lateral refuges in a river channel (Figure 1). The reasoning to select lateral structures was: (i) their broad use in river restoration actions (Pretty et al., 2003), (ii) velocity preferences of the target species (Ferreira et al., 2007; Oliveira et al., 2002); (iii) velocity refuges proposed for other species (Ribi et al., 2014), (iv) habitat modelling studies based on suitability curves (Almeida et al., 2017), and in (v) studies aiming at designing effective fishways for Iberian cyprinids (Branco et al., 2013).

For the overhead cover, the structure was constructed in maritime plywood and was conceptualised based on bank hides that were designed for habitat improvement for trout, termed as LUNKERS (Little Underwater Neighbourhood Keepers Encompassing Rheotactic Salmonids) (IDNR, 2018). This structure (0.60 m x 0.08 m x 0.24 m) was installed in the right wall of the flume (Figure 2 and Figure 3).

The target fish species should be representative of the habitat where the flow-refuge will be deployed, or share the same habitat guilds. To measure the effectiveness of flow-refuges as solutions to mitigate hydropeaking based on fish responses, different organism-level responses should be selected (e.g., metabolic changes and whole-animal performance metrics likely to be associated with rapid flow fluctuations). Glucose and lactate could be adequate because they generally increase after endocrine processes directly associated with primary responses to stress (Pankhurst, 2011). Glucose generally increases after the cortisol response through the cortisol-mediated gluconeogenesis (Pankhurst, 2011); thus, there is a time latency between cortisol and the glucose response, and it has been broadly used in flow variability studies with reported increments comparatively to pre-stress levels (Arnekleiv et al., 2004; Krimmer et al., 2011). Lactate is a metabolite of muscle activity and is expected to increase during continued swimming effort (Kieffer, 2000), ultimately resulting in exhaustion (Wendelaar Bonga, 1997). The validity of a fish response will only be significant if compared with a base-flow or control condition.

To examine the effectiveness of the flow-refuge according to each flow event, the behaviour metrics should be selected based on fish motion directed towards the structure and on swimming activity in the flume. The behaviour metrics can be further divided into two categories: 1) flow-refuge use, and 2) swimming activity in the flume. The swimming activity metrics can be selected for their likelihood to be expressed by fish under the simulated peak events. For example, they can be separated into two types: fish drifts, defined as downstream fish displacements driven by passive advection of the body in the flow direction, and fish sprints, defined as a swimming activity lasting a few seconds and characterised by several tail beats. A detailed characterization of the flow field should be conducted to relate physiological responses, changes in motion, and flow-refuge use, with the hydraulic conditions created by their presence and flow fluctuations. It will be possible to predict the flow field for different flow-refuge configurations using a numerical model, after calibration using ADV measurements. Innovative flow-sensing technology, such as artificial lateral lines, provide a close representation of the hydrodynamic conditions that fish would experience in nature and thus, they should be considered together with classical flow sensing technologies.

The flow-refuges should assure low-velocity regions during up-ramping and connectivity with the main channel during the down-ramping stage. To guarantee these conditions it is necessary to consider specific design criteria (e.g. size and position) (Table 1) according to the existing hydraulic conditions in the river.

Table 1 Design criteria for the deployment of flow-refuges in streams affected by hydropeaking.

These design criteria can be generalised to streams affected by hydropeaking as long as they are adapted to the ecological requirements of the fish community and the hydraulic conditions of the affected stream.