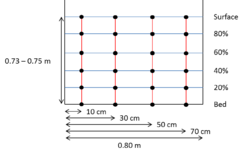 Figure 2: Flow cross-section with the verticals (in red) and the points (black dots) for velocity measurement with the current meter 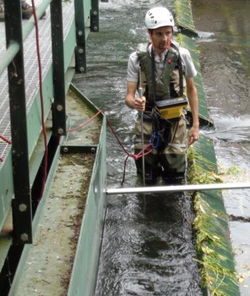 Figure 3: Operator in the downstream migration channel performing measurements with a current meter.

The first devices to measure flow velocities appeared during the 1780s, with the first mechanical current meter which counts the rotations of a propeller and links it to the flow velocity (by proportionality principle).

Today there are 3 different techniques to assess the flow velocity: mechanically, electromagnetically, and acoustically (Figure 1). The acoustic current meters using the Doppler Effect are not presented here, as these tools (e.g ADCP, ADV) are presented separately.

In a mechanical flow meter, the rotation of the propeller produces an electrical impulse detected and recorded by a counter connected to the current meter. The electromagnetic flow meter uses the Faraday law. The sensor creates a magnetic field between two electrodes located at the end of the probe. The flow velocity is deduced from the measurement of the electromagnetic force generated by the passage of water through the magnetic field.

The measurement conditions of discharge through flow velocity fields are regulated by the European standard NF EN ISO 748. The velocities are measured along a cross section at verticals. The number of verticals (n) depends on the width of the channel (w):

One method among others to measure the mean velocity on each vertical is to measure the velocity in one or several measurement points at different water levels on the vertical. The number of measurements points for each vertical depends on the water level. For example, only one point is needed for water level <20 cm at 60% of the water level. If there are only 2 measurement points, they should be at 20 and 80% of the flow depth, and the mean velocity corresponds to the average of the two measured velocities. In the following example, 6 measurements were selected (Figure 2). The example is linked to the velocity profile inside a downstream migration channel, which is not logarithmic.

To do the measurements, the operator needs to be equipped with waders and to be in the stream (Figure 3).

Then a mean velocity is calculated for each flow section between the verticals and the closer bank; by making an average for the sections without including the banks, and by applying the following formula:

The discharge per section can be calculated according to standard EN ISO 748:2007:

is the mean water level and

is the width of the channel.

The total discharge is the sum of all the discharges per section.

The most recent devices have the possibility to directly treat the data and provide the total discharge.