This technology has been enhanced in the FIThydro project! See Innovative technologies from FIThydro for a complete list. 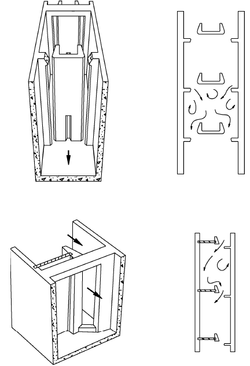 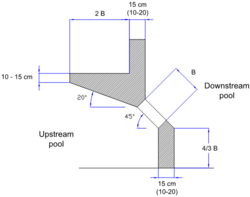 Figure 2: Dimensions of typical cross-wall of a vertical slot fishway 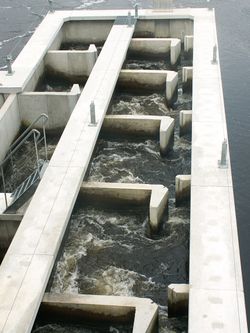 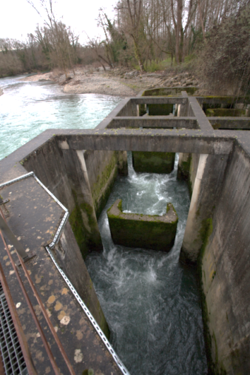 This type of fishway was developed in North America (Clay, 1961), following several studies on models. The pools may have one or two deep slots (Figure 1), depending on the size of the watercourse and the discharge available. The advantage of having two slots is to be able to increase the flow in the device, instead of an attraction flow injection system or to compensate a moderate head drop at the entrance.

The flow from the slot is oriented and tends to be directed to the middle of the pool at an angle of 30-45°, resulting in efficient energy dissipation in all the water volume of the pool. When there are two slots, the flow converges and meets in the central section of the pool, creating calm zones on each side of the pool immediately downstream from the walls.

Hydraulic organization of the flows in the pools has also been the subject of numerous studies ( (Rajaratnam, et al., 1986) (Lenne, 1990) (Rajaratnam, et al., 1992), (Wu, et al., 1999), (Puertas, et al., 2004) (Liu, et al., 2006)). Criteria are recently given to obtain a proper organization of the flows in the pools (Wang, et al., 2010). The pool’s length L is generally 7 to 12 times the width of the slot b. For a basin length of 10 b and a fishway slope of 5%-7.5%, a pool’s width B equal to 7-7.5 b could be adopted so as to obtain a two-recirculation zone flow topology and avoid the jet impacting the side opposite the slot. The study of fish behavior (trout and chub) in a ¼ scale vertical slot fishway model, testing different pool width B on slot width b ratios, showed a better rate of fish passage for the two-recirculation zone flow topology than a unique recirculation zone flow topology (obtained when B/b <7). For different pool lengths, one can recommend keeping the same width / length ratio (0.7-0.75). In case of double-slots fishway, the pool width is usually 9 to 10 times b (Larinier, et al., 2002).

A sill can be installed at the base of the slot, especially to limit flow in the device. Sill forces the orientation of the jet to the side opposite the slot, with the hydraulic consequences of reducing the flow topology to one recirculation zone. Moreover, the flows immediately downstream from the sill will tend to plunge (Ballu, et al., 2015).This flow pattern appears less favorable for fishes, after testing with trout on a ¼ scale model (Ballu, 2017). As far as possible, taking into account these experiments, we recommend not installing any sill in the slot.

The flow through a vertical slot fishway can be expressed by the formula:

= head at the slot (m), i.e. the difference between the water level upstream of the slot and that of the slot crest

= drop between the two pools (m)

= discharge coefficient of the slot

The great advantage of the vertical slot fishway is that it can accommodate significant variations in the upstream water level, provided that the level downstream is subjected to similar variations. The conditions of velocity and turbulence remain very stable, whatever the water levels in the fishway, and fish can pass through the fishway, swimming at its preferred depth

Planning of a vertical slot fishway will start with mapping and surveying of the barrier itself and the river reach upstream and downstream of the barrier, including information about the hydropower scheme. Surveying must also be conducted in the area of the river bank where the fishway is planned, including geological surveying. Geographic data should be handled in GIS software for further planning and analyses. The design of the fishway should be conducted with conventional hydraulic and civil engineering calculations and drawing (see FIThydro deliverable 2.1). All material used in a fishway must be planned to withstand physical strain from water, floods and frost. Monitoring facilities should basically be planned in the upper part of the fishway.

Physical implementation of vertical slot fishways requires heavy machinery suited for the river size and its surrounding terrain, such as excavators and trucks. Work with explosives is relevant in most cases and blasted rocks and transportation of material out from the site is common. Surplus rocks should not be disposed at site because of pollution risk. The construction phase includes construction of concrete formwork, casting of concrete and iron reinforcement work.

Injuries on vertical slot fishways from physical wear must be monitored and repaired in order to secure regular fish migration. Maintenance work normally require hand-tools more than heavy equipment, but casting of concrete is typical. Depending of the site, removal of sediment, branches, logs and floating debris in pools and fishway entrance is common. Monitoring systems require regular inspection, depending on product and system.