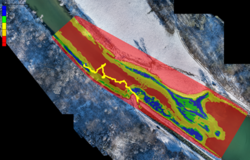 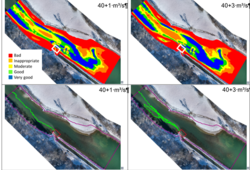 The agent-based model CASiMiR-Migration for attraction flow assessment is a module of the fish habitat simulation system CASiMiR (Noack et al. 2014, Schneider et al. 2016). The model is designed to mimic fish movements in the environment of upstream migration fish pass outlets. It is implemented as a combination of habitat suitability model and agent-based model. The tool uses knowledge on hydraulic preferences of fish in the period before entering a fish pass, on etho-hydraulic thresholds for flow velocities and on the searching behaviour of individual fish. It is the progression of a first model version based purely on flow velocity vectors (Kopecki et al. 2014, 2016).

The knowledge processed in this extended model version in terms of fuzzy-rule systems has been gained by field data (fish tracks), expert judgement and literature. The application of the model is aiming at the assessment of probability for fish being routed into the lower end of fishways. An outcome of this assessment is, that the fishway design can be adaptively improved focussing on the entrance position and geometry in conjunction with the amount and orientation of the prescribed attraction flow.

The model can be used for the investigation of different locations and designs of fish pass outlets as well as for different release flows. Basis for the model application is a 2D or 3D hydrodynamic model providing information on the spatial distribution of water depth and flow velocity. Habitat suitability (migration corridor suitability) is calculated, and fish agents are placed in the model. Following behavioural rules that integrate habitat suitability, flow velocity magnitude and direction, swim direction and random behaviour the fish agents generate tracks that either lead them to the fish pass entrance or not. Depending on the percentage of agents finding the fish pass the attraction flow is rated. Running the model for different scenarios of the fish pass location and design as well as morphological and hydraulic variants the planning can be optimized, or the functionality of existing system can be assessed.

CASiMiR migration has been developed and applied in the FIThydro test case Altusried at river Iller. Figure 2 shows the application of the model for two different release from the fish pass entrance area. First results seem to indicate that higher flow releases in the fishpass outlet area do not significantly improve attraction flow for barbel that approach from the downstream central part of the river. Another first impression the results give is that an increased flow in the river, i.e. a smaller relative flow release from the fish pass is not necessarily negative for the attraction. However, the number of scenarios modelled has to be increased and the evaluation of the database is ongoing.

The model is not yet available for third parties but is intended to be made accessible in a licensed version in future under http://www.casimir-software.de, where current demo versions of other CASiMiR-modules are available for download