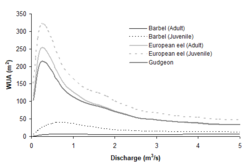 Developed by: Freshwater Institute in Winnipeg, Civil and Environmental Department of the University of Alberta in Edmonton, Midcontinent Ecological Science Center of the U.S. Geological Survey in Ft. Collins, and Fisheries Division of the Alberta Government in Cochrane.

The model suite consists of four programs: R2D_Bed, R2D_Ice, R2D_Mesh and River2D (Figure 1). R2D_Bed was designed for editing bed topography data while R2D_Ice is intended for developing ice topographies to be used in the modelling of ice-covered domains. The R2D_Mesh program is used for the development of computational meshes that will ultimately be input for River2D. The latter is then used to solve for the water depths and velocities using the 2D shallow water equations throughout the discretized domain. The habitat model to calculate the WUA is incorporated in the River2D program.

The River2D computes the water depths and velocities for any point in the river reach. The final goal is to calculate the WUA for a given fish species and life-stages by using Habitat Suitability Curves.

Topography forms the template of the modelling mesh which is draped over the boundary surface and which forms the basis for the numerical solution to the governing flow equations. The challenge of building a mesh is to distribute the nodes in such a way that the most accurate solution is obtained for a particular purpose. Closely spaced nodes in areas of high interest, gradual changes in node spacing, and regularity of elements are important considerations.

The fish habitat component of River2D is based on the Weighted Usable Area (WUA) (Bovee et al., 1998) concept used in the PHABSIM family of fish habitat models. The WUA is calculated as an aggregate of the product of a Composite Suitability Index (CSI, range 0.0 - 1.0) evaluated at every node in the domain and the "tributary area" associated with that node in the finite element mesh. The Suitability Index (SI) for each parameter is evaluated by linear interpolation from an appropriate Habitat Suitability Curves (HSC) to be supplied separately. Velocities and depths are taken directly from the hydrodynamic component of the model. The channel index values may depend on channel substrate or cover for different fish species and life stages. These values are interpolated from a separate channel index file to the computational nodes. The interpolation may be linear (continuous) or nearest neighbour (discrete). At the last stage, the River 2D computes the WUA (Figure 4) as the product, harmonic mean, or minimum value.

For habitat studies, the assumption is that the habitat is optimal when it reaches a maximum value of WUA (Figure 5).

River 2D is a freeware available on the internet: http://www.river2d.ualberta.ca/