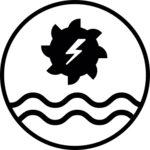 Figure 1: The figure illustrates the hydropeaking parameters flow ratio (amplitude of change), speed of change and frequency of change in water flow/level. 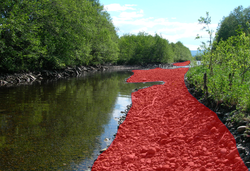 Figure 2: Fish using the areas identified by red colour will have a risk of stranding when the water level drops rapidly.

Hydropeaking refers to hydropower operations that are characterized by more rapid and frequent changes in power production than typical base-load hydropower production. If the water is released into a river, rapid fluctuations in discharge and water level may cause negative impacts to the riverine ecosystem. The severity of the hydropeaking can be categories according to the magnitude of changes in flow, the frequency of the changes, and the timing of the changes, i.e. what time of the day and year the hydropeaking happens.

Bakken et al. (2016) defines measures to reduce the impacts from hydropeaking operations into three types; i) operational measures that involves adjusting the magnitude, speed of change, frequency and timing of change to the better for the ecosystem exposed to hydropeaking, ii) physical changes in the river system downstream the outlet of the hydropower plant, and iii) technical measures directly on the power plant/infrastructure, i.e. a technical setup that allows a wider range of turbine discharges, slower stop and start-up, etc.

The measures presented in the following are all related to changes in flow. 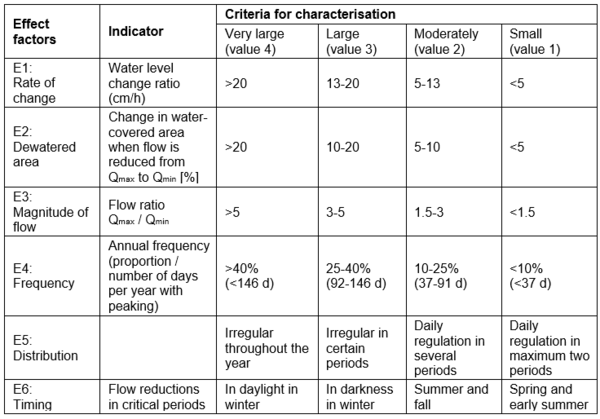 The full categorisation system published in Bakken et al. (2016) and Harby et al. (2016) also includes the dimension of assessing the vulnerability of the ecosystem exposed to hydropeaking. The vulnerability is given by assessing factors such as effective population size, degree of limitations in recruitment, habitat degradation, reduced water temperatures and percentage of impacted river length compared to total length. The combined assessment of the effect factors and the vulnerability will give the total and overall impact assessment.

If the technical system is properly designed with respect to providing environmentally adapted hydropeaking operations, the introduction of a new flow regime would simply be to release the defined water flows at the right speed and time of the day and year. If the existing infrastructure cannot release support slower ramping rates, adjusted water flow and the flexibility of the frequency and timing, a re-building of the infrastructure might be needed.

A new flow regime better adapted to the ecosystem tolerance of hydropeaking operations would normally not introduce any extra maintenance. Hydropower operators must normally document that the environmental restrictions are followed, and would have standard monitoring systems (gauging stations) in place. It should be ensured that the monitoring is made with sufficiently high resolution to capture the rapid changes in water flow due to hydropeaking.

The positive environmental effect of the released environmental flow must be surveyed by assessing the development of the fish population, e.g. by monitoring species composition, densities and age structure of populations, number of smolts, etc.