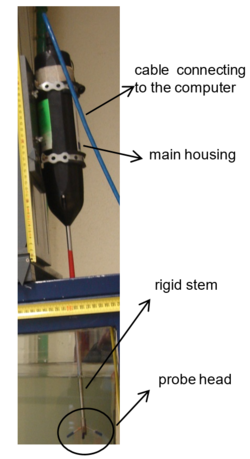 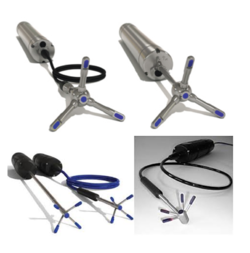 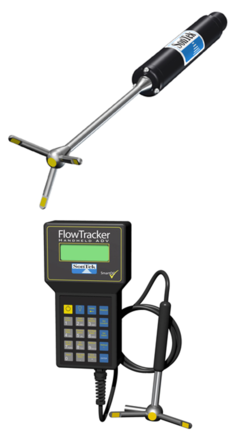 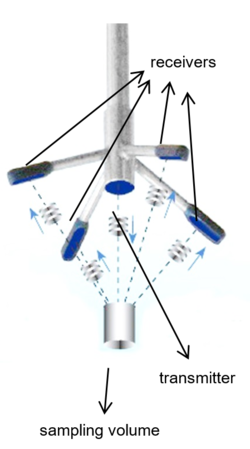 Acoustic Doppler velocimetry (ADV) is a velocity measurement technique that allows for the measurement of 3D flow velocities by using the Doppler shift principle. ADV operates by emitting short acoustic pulses along a transmitter beam, the central transducer. As the sound bursts propagate through the water, a fraction of the acoustic energy is scattered back by ambient scatterers such as suspended sediments and microbubbles (Kraus et al. 1994, Lohrmann et al. 1995, McLelland & Nicholas 2000).

The ADV comprises a probe connected to the main housing, which contains the electronics, by either a rigid stem or a cable (Figure 1, 2 and 3). The main housing is connected to a computer by a cable. The sampling volume is located away from the probe (Figure 4), which reduces the interference of the probe with the flow and measurement point. The reduced probe size also minimizes the flow interference. The probe consists of a transmitter and three or four receivers (Figure 2 and 3), which are equally angled and symmetrically arranged around the transmitter (Khorsandi et al. 2012). The fourth receiver provides redundancy improving turbulence measurements. The transmitter emits ultrasound (short acoustic pulse) at a known frequency and the receivers get back the echo of ultrasound (sound-scattering particles) reflected in the water particles with a different frequency. The difference between the frequency emitted and reflected is proportional to water velocity.

The signal-to-noise ratio (SNR) is a measure of the scattering strength, representing the strength of the echo relative to the electronic noise level, and it is a central parameter in ADV operation (Kraus et al. 1994). The acoustic echoes originated at the sampling volume, defined by the intersection of the transmitter and receivers beams (Figure 4), are detected by the receivers’ transducers. The frequency of the echo is Doppler shifted according to the relative motion of the scatterers, assumed to be travelling with the velocity of the fluid flow. The Doppler shift observed at each receiver is proportional to the component of the flow velocity along the bisector of the receiver and transmitter beams. The radial or beam velocities are computed sequentially for each receiver and are then converted to a local Cartesian coordinate system (ux, uy, uz) by using a transformation matrix. This transformation matrix is determined empirically by the manufacturer by calibrating the system at one speed and will remain constant if the physical dimensions or geometry of the probe remain unchanged (Kraus et al. 1994, Lohrmann et al. 1995, McLelland & Nicholas 2000).

The ADV uses a dual pulse-pair scheme with different pulse repetition rates separated by a dwell time (McLelland & Nicholas 2000, García et al. 2005). The longer pair of pulses is used for higher precision velocity estimates while the shorter pulse is used for ambiguity resolution, assuming that the real velocity is beyond the limit resolvable by the longer time lag (García et al. 2005). The pulse repetition rates can be adjusted by choosing the instrument velocity range.

It is a widely used technique due to its capability to measure the three components of instantaneous velocities, its robustness and portability, the fact that it does not require calibration and its relatively low cost (Khorsandi et al., 2012, Quaresma et al., 2017). It is also suitable for laboratory and field applications.

It is known that the precision of ADV measurements in turbulent flows is affected by random spikes, including sampling errors linked with analogue/digital conversion, and the Doppler ambiguity process, characterized by the amplitude modulation of the backscattered signal related to the transit time of the acoustical targets through the sampling volume (this error is independent of the flow and depends on the pulse length, set by the velocity range), Doppler noise (which is intrinsic to the measurement principle and is associated with the random motion of targets in the sampling volume), and errors due to the mean velocity gradients in the sampling volume and associated to spatial averaging of the instantaneous flow field within the sampling volume and unresolved turbulent scales that are of the same order of magnitude or smaller than the sampling volume’s transverse size (Garbini et al. 1982, Voulgaris & Trowbridge 1998, McLelland & Nicholas 2000, Hurter & Lemmin 2001, Goring & Nikora 2002, Khorsandi et al. 2012). The spatial averaging of fluctuating motion contributes to reducing the variance of the signal; all the other sources of error contribute to increasing it (Hurter & Lemmin 2001).

In recent years several papers have been focusing on the theoretical and experimental identification and characterization of noise sources affecting the turbulence measurements performed with ADV (Garbini et al. 1982, Lohrmann et al. 1994, Voulgaris & Trowbridge 1998, McLelland & Nicholas 2000, Hurther & Lemmin 2001, García et al. 2005). Even when all the manufacturers’ precautions are taken into consideration, the signal will have a noise level that affects the values of turbulence parameters (García et al. 2005).

On the other hand, the Doppler noise is “white” noise with a Gaussian probability distribution and a flat power spectrum (McLelland & Nicholas 2000, Hurther & Lemmin 2001, García et al. 2005). White noise does not affect the mean velocity values because it has zero mean. Lohrmann et al. (1994), Voulgaris & Trowbridge (1998) and McLelland & Nicholas (2000) showed that the ADV can accurately predict mean velocity and Reynolds shear stresses.

Hurther & Lemmin (2001) proposed a correction method for subtracting the contribution of noise from the mean turbulent parameters. This method takes advantage of the bistatic four-receiver configuration of some ADV instruments, and consequent redundancy in the measurements of the velocity along the axis of the ADV. The variance of the noise and the noise spectrum can thus be determined. The geometrically weighted noise spectrum is then subtracted from the spectra of the longitudinal components. Turbulence intensities are obtained by integration of the latter.