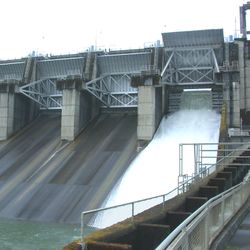 Water being released over the Foster Dam fish spillway. Note the fish ladder for upstream migration on the right-hand side of the picture.

Without modification of the water intake, the shutdown of conventional turbines is the only solution to avoid turbine passage and the corresponding fish mortality rates. This solution can in principle be effective, but can become very costly for the hydroelectric operator if the shutdowns are not targeted. The challenge is not only to target, but also to anticipate the events of downstream migration.

Water spill over dams and gates, partly combined with periodic stop of power plants, have been used to bring down migratory fish past power stations. The method is suitable for periodic fish migrations, such as salmon smolt during spring floods and for eels during autumn and winter floods. These migrations often coincide with flooding where the water flow exceeds the power plant capacity. At run-of-river power plants in North America, this method is frequently used to pass salmon smolts, both for Atlantic salmon and species of Pacific salmon. In Germany it has been used to pass eels (Adam 2000, Egg, etc. 2017). Water spill past turbine intake is considered a safer alternative to turbine passage, but also the use of spill water fish injuries can occur. The loss is still low (2% after Coutant and Whitney 2000). It should be noted that the relationship between water spill and fish migration is not linear, i.e. that increased spill does not necessarily mean a proportional increase in migration past the dam. More important for its efficiency is the placement of the dam relative to main stream and power intake (Coutant and Whitney 2000, Fjeldstad et al. 2011).

Planning of any downstream fish migration systems require a comprehensive study on fish behaviour to assess when and where fish move on their downstream migration. This can be conducted by telemetry experiments or visual observations with video or sonar technology. River hydraulics at the intake must be modelled by 2D or 3D CFD software if needed. The most difficult is to identify the targeted species and their migration period to correctly target the period to stop de turbines.

Targeted shut down of turbines need the implementation of devices allowing passage of water by another way than the turbines like gates, valves, etc.