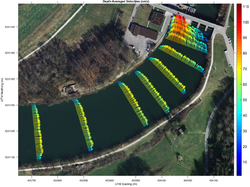 The ADCP is equipped with multi-beams (three up to nine beams, Figure 1), which emit acoustic energy at a known frequency and record the frequency of the acoustic energy backscattered by the particles in the water column. The velocity of the water flow along each beam is computed based on the change in the frequency of the emitted and backscattered acoustic energy, i.e. the Doppler shift. Detailed information on the ADCP working principle and its limitations are described by Simpson (2002). The ADCP beams are positioned to 20 or 30 degree away from the vertical axis. By using a simple trigonometry, 3D velocity components are computed from the Doppler shifts measured with three or four sonar beams. In the latter, a redundant, fourth beam is used to compute error velocity, which is the difference between a velocity measured by one set of three beams and a velocity measured by another set of three beams at the same time (Simpson, 2002). The error velocity is used to evaluate the assumption of horizontal homogeneity. The frequency of the ultrasonic sound transmitted by commercially available ADCPs ranges from 30 kHz to 3000 KHz (Simpson, 2002). ADCP can be used at a fixed position, i.e. stationary, or mounted to a tethered boat, manned boat or a remote-controlled boat (Mueller et al., 2013). Non-stationary i.e. moving boat ADCP measurements yield the flow velocity and direction relative to the boat and hence the velocity of the boat should be accounted for by using either bottom tracking or global positioning system (GPS) to determine true flow velocity.

Within the scope of FIThydro, high resolution 3D velocity, as well as bathymetry measurements, have been conducted using an ADCP mounted on a high speed remote-controlled boat at two hydropower plants (HPP) in Switzerland since the beginning of 2018. The models of the ADCP and the boat are River Pro 1200 kHz including piston style four-beam transducer with a 5th, independent 600 kHz vertical beam and Q-Boat purchased from Teledyne Marine, USA, respectively (Figure 2). An external Differential GPS (DGPS) system from A326 AtlasLink (Hemisphere) was used to accurately measure the positions of the ADCP. One set of the battery for the Q-boat allowed us to make measurements for 4 hours up to 10 hours depending on the flow velocity and field conditions i.e. temperature.

Compass calibration and moving bed tests are conducted before each ADCP measurement at the case study HPPs. The Test Case study HPP Schiffmühle is located on the 35 km long river Limmat between in Untersiggenthal and Turgi near Baden in Switzerland (see the Test Case presentation file for HPP Schiffmühle). Two transects of ADCP at each densely spaced cross-section along the river were enough but high accuracy of altitude data was required for the bathymetry measurements at the HPP and in general. The present DGPS system resulted in ±1m of errors in altitude measurements (Figure 3, black line). Therefore, use of a total station, which is time consuming, or real-time kinematic (RTK) GPS is recommended to accurately determine water surface and hence bathymetry (Figure 3, red line from total station measurements).

Furthermore, the test results from the HPP Bannwil located on River Aare in canton Bern indicated that averaging of at least 8 transects or even more at each cross-section is needed to obtain robust and smooth velocity field and accurate discharge data at highly turbulent and 3D flows occurring in rivers, turbine inlet and outlets or other hydraulic structures (see the Test Case presentation file for HPP Bannwil).

The ADCP data from both HPPs Schiffmühle and Bannwil are post-processed according to the workflow sketched in Figure 4 using the software WinRiver II (Teledyne software) and velocity mapping toolbox (VMT, Matlab based software for processing and visualizing ADCP data provided by U.S. Geological Survey). Figure 5 shows the depth-averaged velocities at the HPP Bannwil plotted with VMT. VMT can be used with the output files from Sontek ADCPs. For further data analysis and presentation on the maps like river bed changes, Q-GIS (free software) or ARC-GIS (Commercial software) are also recommended.

The present system based on the remote-controlled boat platform has advantages over the tethered boat ADCP application. These are less man-power needed, faster and more measurements in a shorter time, no flow disturbance and interference with beams and smoother movement of the boat.

The total costs for the Teledyne RiverPro 1200 kHz, Teledyne Q-boat and DGPS from Hemisphere Atlas link amount to approx. 22’000 €, 21’200 € and 3’340 € respectively. The costs of shipping, VAT, some mounting apparatus and long-range radio modem are excluded. For current costs of the equipment, we recommend to ask the corresponding supplier. Note that Q-boat can also house Sontek RiverSurveyor M9. Furthermore, a rugged laptop for field use is recommended.

Links to the suppliers of equipment: