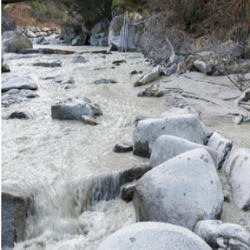 Dams act as a barrier for sediment transport in river systems. Sediments-laden inflows transport sediments from upstream catchment that will be trapped when reaching the reservoir. Sediments deposit in the bottom of the reservoir and reduce its storage capacity. In geographical areas with very high sediment yields, reservoirs can be filled with sediments after some years of operation, and the reservoirs not fulfill their water storage function anymore.

Reservoir flushing consists in removing deposited sediments out of the reservoir to retrieve the reservoir storage capacity. As a result of flushing, deposited sediments will be remobilised and released downstream of the dam inducing a supply of sediments in the downstream river at the time of operation. Reservoir flushing is mainly a reservoir management measure. However, the supply of sediments induced by flushing could help to re-balance the deficit in the downstream river if the timing of the operation and the amount of sediments flushed match the transport capacity of the river (Morris et al. 1998, Tigrek et al. 2011, Kondolf et al. 2014).

Reservoir flushing necessitates a complete emptying of the reservoir when planned outside of flood periods, thus interfering with hydropower operations. The reservoir is drawn down to establish flow conditions through the reservoir that are similar to the river flow conditions prior to dam construction. Low-level outlet gates at the dam are opened to release water flows out of the reservoir. The free water surface should be at or lower than the gate level. However, in large rivers with run-of-the-river hydropower plants, sediment flushing does not necessarily require a complete stop of power production.

Both technical and ecological challenges should be considered prior to flushing reservoirs and included in a comprehensive analysis about the occurrence and the extent of sedimentation processes in the reservoir.

From a technical point of view, the succeed of flushing will depend on the amount of deposited sediments which have been scoured and if a significant part of the capacity storage has been recovered. The favourable conditions for flushing are: reservoirs located in narrow valleys with steep slides, steep longitudinal slopes, presence of low-level gate at the dam, river discharge sufficient to mobilize and transport sediments (Morris and Fan 1998), conjointly to an impoundment ratio (reservoir storage divided by mean annual flow) not exceeding 4 % (Sumi 2008).

From an ecological point of view, the capacity of the downstream river to transport the flushed sediments further downstream, as well as the potential change in water quality during the flushing need to be considered. If the shear stress is not sufficient to mobilize sediments, the flushed sediments can deposit downstream and clog in interstices. It will be even more difficult to transport the sediments later, since the shear stress threshold allowing mobilization of clogged sediments will be higher. In addition, water turbidity can be significantly modified if large concentrations of sediments are released in rivers with low to moderate discharge. To avoid large changes in water quality and deposition of sediments in the river stretch located nearby the dam, the timing of the flushing should correspond to periods of high flows. In this context, the planning of flushing operation is of very high importance to avoid impacts on the ecosystem.

There is a large number of numerical models that can be applied to simulate the reservoir during the planning phase of flushing. Examples are HEC-RAS, ISIS, SSIIM. Sediment management strategies including different flushing scenarios can be modelled and tested. The efficiency of the measure and it's the impact on storage capacity reduction, as well as sediment transport in the downstream river can be simulated to design the flushing operation.

During flushing, the discharge through the reservoir should be large enough to ensure mobilization of the deposited sediments. Low levels gate at the dam will be opened during the flushing.

Concentration of suspended sediments and turbidity levels in the river must be monitored during flushing operations to ensure that their value remain under ecosystems thresholds and that the operation do not have significant impacts on the physical and chemical environment. Discharge and water velocity can be registered with devices such as mechanical current meter, Acoustic Doppler Velocimeter Probe (ADV), Acoustic Doppler Current Profiler Probe (ADCP).Sediment concentration in the downstream river can be monitored under flushing using acoustic sampling, optical sampling, or trap samplers.

In climate areas with high sediments-laden inflows entering the reservoir, flushing is one major alternative to avoid reservoir filling and the loss of storage. Flushing operations should be carried out on a regular basis to insure the technical and ecological succeed of the measure and be included in a sediment management plan.

Concentration of suspended sediments and turbidity levels in the river must be monitored also after flushing operations to ensure that their value remain under ecosystems thresholds and that the operation do not have significant impacts on the physical and chemical environment. Additionally, monitoring of sediment deposition downstream the dam, including clogging of sediments and the potential impacts on fish shelter and spawning areas needs to be carried out. These monitoring can help to implement more sustainable flushing operations.

Regular flushing and appropriate timing of the flushing are recommended. Regular and more frequent flushing will avoid large quantities of sediments to accumulate, hence allow hydropower production from full reservoir storage capacity. In addition, more frequent flushing of smaller sediment quantities is more adapted to the need of sediments in the river and the ability of the river to transport further downstream the sediments.