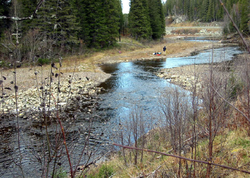 Figure 1: Example of a reach where the "river in the river" concept has been put into practice, with a broad stream bed where flow has been severely reduced. The restored reach meanders within the former river course with areas alternating between pools and riffles. The location is Dalåa river in the Stjørdal system, mid-Norway.

In bypassed reaches subject to minimum flow releases and considerably reduced flow, the river's natural course will no longer be adapted to prevailing flow conditions. The physical setting is altered dramatically, and we typically observe low water velocities, shallow stream depths and the accumulation of fine-grained sediments. This is a natural development which can be mitigated by implementing design measures which, involve confining the stream course and introducing alternate reaches of riffles and pools. Such measures are named "a river in the river". Current deflectors, groynes, rocks and other structures are used to narrow river width permitting current velocities to increase and the river to meander more. If necessary and feasible, deep pools can be excavated and small weirs constructed to produce alternate slow- and faster flowing reaches, respectively. The use of cell weirs will create other possibilities. The water-covered areas will be reduced with this type of measure, but the areas with permanent water will be more attractive to fish. The measure will require maintenance, especially if the reach in question is subject to natural floods and bank overflow.

The approach to analyse the appropriateness of the measure 'river-in-river' would be after a diagnosis of the total system has been performed and the limiting factors identified. In the case where habitat is a limiting factor, 'river-in-river' should be considered as a measure. This measure would require that the river is sufficiently wide to allow a meandering structure of the river. The flood capacity of a modification of the river bed should also be carried out, to ensure that the bypass section of the river has similar conveyance capacity after the measure is put in place.

Hydraulic tools are useful in analysing the hydraulic conditions in a river, before and after modifications. A high number of hydro-dynamic and hydro-morphodynamic tools are available for such analysis with different functionality and data needs, ranging from more simplistic 1-dimensional (1D) hydraulic tools, to highly advanced 3-dimensional (3D) tools solving a range of partial differential equations (Navier-Stokes) in all directions. They all require detailed description of the bottom topography of the existing and planned river, and a flow regime the river will undergo. As average flow velocities (in depth and across the river) will not be sufficiently detailed to identify the best locations, 2D- or 3D models will be required. Examples of such models are River2D, HEC-RAS 2D, Flo2D/3D, Mike21c, OpenFOAM and TELEMAC 2D and 3D.

Building a 'river-in-the-river' will require access to machinery to be used within the river. To develop a 'river-in-the-river', digging of pools, insertion of deflectors, re-placement of substrate, might be needed to create good habitats. An evaluation of the hydraulic effect of the removal of the newly designed river can be done by detailed measuring the area where modifications have been put in place, and then configuring and applying a hydraulic model. An evaluation of the biological effect could be done with standard biological methods, such as for instance electro-fishing, which will give the densities of juvenile fish.

Habitat measures in regulated rivers must often be maintained unless the natural functions related to flow and sediments are restored, such as flood events and connectivity of the sediments. The frequency of the maintenance will be very site-specific.