Figure 1: Reynolds decomposition for the velocity component u 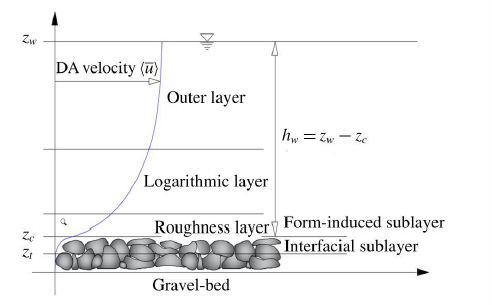 The Double Averaging Method (DAM) is used for hydrodynamic variables and to provide simplified equations for the hydrodynamic modeling of flow similar to the Reynolds averaged Navier-Stokes equations (RANS), which are time-averaged. Over rough river beds flow structures are highly heterogenous. Therefore, they need to be resolved in detail instead of using simplified 2D assumptions, which is common within the RANS (Nikora et al. 2001). The concept of the DAM shall overcome this problem by taking into account the averaging over a certain area in addition to the averaging over time. This area should be chosen parallel to the river bed. The approach leads then to new equations of conservation of continuity and momentum.

The main advantages of the double-averaging approach include (Nikora et al 2007 a):

However, the key limitation of this method is the need of a clear separation between turbulence and the mean flow on a wide enough scale.

How can the DAM be applied?

Turbulent flow is characterized chaotic - irregular in space and time. Hence, a statistical description needs to be used to define its properties. This can be done using the Reynolds-decomposition, which is a fundamental basis in characterizing turbulence: The measured instantaneous variable u is divided into the ensemble average ū (time-averaged) and the temporal fluctuation u', as illustrated in Figure 1.

Hence, the instantaneous variable is a combination of these parts. As a next step the time-averaged variable is also averaged in space, similar to the Reynolds-decomposition. This is most often done in planes zi parallel to the bed. The resulting instantaneous variable consists of the DA-value, the spatial fluctuation and the temporal fluctuation in the time-averaged flow variable:

The flow is subdivided into three main layers according to the influence of occurring stresses: The top layer is called the outer layer, where bed roughness does not influence the velocity distribution. The next layer closer to the river bed is the logarithmic layer, where the distribution of the time-averaged velocity follows a logarithmic law. The logarithmic region does not reach until the roughness tops. The roughness layer is the first defined flow region to contain free flowing parts as well as the upper part of the roughness elements. In contrast to the other flow regions the roughness layer is influenced by the individual roughness elements of the river bed and therefore faces additional forces. It is subdivided into the form-induced sublayer just above the roughness crests and the interfacial sublayer which occupies the flow region between the troughs and the tops of the roughness elements. The form-induced sublayer was introduced because the flow is strongly affected by turbulences produced by the roughness crests which may appear as small eddies and causes an extensive spatial heterogeneity.

This is considered as the form-induced stresses in the Double Averaging momentum equation. In the case of a rough permeable bed, the layer below the roughness troughs is the last one and is named the subsurface layer.

Where can the DAM be applied?

The method allows to study the hydraulic conditions in natural environment hence in rough river beds. This includes for example . (Nikora et al 2007 b):