Placement of stones in the river

Note that this measure is included in both the habitat and sediment categories.

Figure 1: Measurement of sheltered habitat using a 13 mm-thick plastic hose inserted into interstitial spaces between rocks within the area of a 50 x 50 cm steel frame. 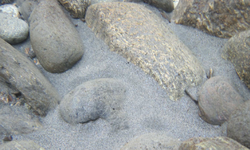 Figure 2: Area of a river with reduced shelter due to deposition of fine material. 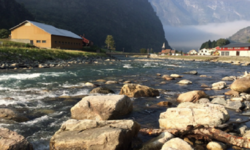 Figure 3: A river with large stones creating shelter for adult fish to the right.

In steeper rivers larger rocks are often naturally present, but these have sometimes been removed in order to improve the capacity to convey floods or to ease floating of timber. Larger stones provide shelter and resting places while smaller sized stones give interstitial space to shelter juvenile fish. Combined with changes in the reduction in large floods, sediment dynamics and clogging of the substrate, shelter can be the limiting factor ('bottleneck') in the development of the fish population. Placement of stones of the river will create hydraulic diversity and can be an efficient measure in reducing this bottleneck (Pulg et al 2017).

Similar effect to adding new rocks to the river can be obtained by for instance ripping or cleaning of the substrate to remove finer sediment from the river bottom.

A first step in considering placement of stones in the river as a measure to increase the shelter would be to assess if this is the limiting factor for the development of fish population, i.e. diagnosis in the environmental design terminology. Larger stones (boulders) will provide shelter to larger fish, while smaller stones (pebbles, cobbles) will form interstitial spaces for smaller fish.

The presence of larger stones can be found by visual inspection walking along the river, or by use of orthophoto and airborne devices with camera, which further can be mapped in a GIS.

Shelter for juvenile salmonids can be measured with a simple method where the number and depth of interstitial species within a given area is counted with use of a rubber tube (Finstad et al. 2009). The number of spaces of varying length are then summed, where the deeper holes assigned a larger weight than the lesser depth. The number of interstitial spaces within an area of 50 cm * 50 cm, limited by e.g. a steel-frame (Figure 1), is counted and the depth registered. The sizes of interstitial spaces are deter¬mined based on how far down between the rocks the hose can be inserted. Three shelter categories are recognised; S1: 2-5 cm, S2: 5-10 cm, and S3: >10 cm.

The average number of sheltered habitats for each of the three categories is calculated of each transect. These values are then summed up and weighed to give a value for "weighted shelter" after the following formula;

After the measure has been put in place, the improvements in shelter can be measured carrying out the same procedure.

The effect of placing larger rocks in the river on shelter can be modelled with 3D hydraulic tools such as OpenFOAM, Star-CCM, TELEMAC, etc. For a practical application it appears, however, that carrying out such a modelling exercise is a far too extensive job compared to the reduced uncertainty in the effect this might give. As such, use of 3D models must be considered mostly for research purpose.

The implementation of this measure would require access to rocks of the right size and distribution. If such rocks are available from nearby areas, the need for transportation will be minimised, but the use of dumper and tractor must be counted in. Helicopter can also be an option in more remotely located areas. The placement of rocks in the river would normally require supervision of a biologist, hydraulician or another experienced person in order to secure the right positioning.

Habitat measures in regulated rivers must often be maintained unless the natural functions related to flow and sediments are restored, such as flood events and connectivity of the sediments. How often the maintenance must be made will differ from river to river and can vary from for instance every 5 year to every 20 years. Rivers with larger volumes of fines, intense growth of moss, algae and macrophytes would need more frequent maintenance than rivers with cold water and low nutrient concentrations (less growth).