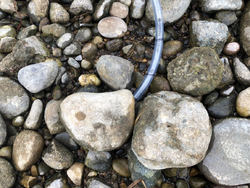 Developed by: A. G. Finstad

The technique was developed by Finstad to estimate the shelter availability for juvenile salmon (Finstad et al. 2007a). In this stage of their life cycle, the salmon seeks shelter in the free spaces of the upper layers of the riverbed sediment (Figure 1). The existence and size of such openings to be used as shelter is measured with the described technique. It is relatively easy to be carried out in the field. The method is based on the idea to mimic the small fish by using a plastic tube, which has the approximate diameter of such a fish.

For salmon, Finstad used tubes with five different diameters (5, 10, 13, 16, 22 mm). As a result of their experiments Forseth et al. (2014) suggest the use of a 13mm tube to conduct the tests in an area of about 0.25m2. The tube is marked according to the three different shelter categories at lengths of 2, 5 and 10 cm to be able to detect certain possible hiding depths. Within the fixed framed area one is aiming to find every hole or opening where one can stick the tube into. The length of the tube (defined by the three rings) which is not visible anymore, defines the potential hiding depth (Figure 2).

The post-processing of the data is quite simple and described in the following section.

The method was developed in and for Norwegian rivers with large grain sizes. It is currently (also in FIThydro) under investigation if, when using it in rivers with a smaller D50, i.e. smaller grain sizes, this relation still applies or another relation becomes relevant.

It should further be applied also to other fish species than the salmon. Therefor additional tubes with diameters of 5 mm and 8 mm are used within the project`s measurement campaigns. These results might then be linked to the D5 and D10 grain diameter of the sediment (Szabo-Meszaros et al 2016).

For the measurement the following material is needed:

When all values are collected in the field, the counted numbers for the different classes / hiding depth per spot are weighted using the following empirical formula described in Forseth et al (2014):

Based on the following matrix the shelter availability can be defined: