Figure 1: Principle of the hydropeaking tool for categorization of regulated rivers according to the potential impacts of hydropeaking on fish population (source: ). 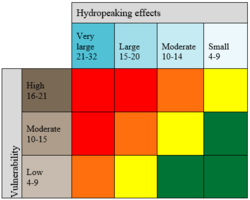 The Hydropeaking Tool was designed to assess the impacts of hydropeaking on fish populations in regulated rivers. It is available as an Excel file. The hydropeaking tool is based on a method for assessing impacts from hydropeaking developed for salmonids at SINTEF Energy as a part of the [CEDREN] EnviPeak project (Norwegian Research Council, Grant number 193818).

In FIThydro, the Hydropeaking Tool has been developed also for Iberian barbel and grayling, in addition to salmonids. Factors, criteria and thresholds that determine the assessment for these species have been modified based on available literature and expert knowledge.

In the Hydropeaking tool, the impacts from hydropeaking are divided into two axis: direct effects from hydropeaking and vulnerability of the fish population to the additional impact from hydropeaking. The starting point is not a natural river, but a hydropower regulated river that are operating without peaking. The effect axis characterises the possible ecological impacts of peaking from how physical conditions such as flow, water level and water covered area changes, given the hydropower system and river morphology. The vulnerability axis characterises how vulnerable the system is to further influence from peaking. Both axis may be evaluated separately, but we also provide a system to combine them and obtain an overall assessment of hydropeaking (Figure 1).

The current version of the Hydropeaking Tool is available in Microsoft Excel. The user has to enter input values for effects and vulnerability parameters for the studied river in corresponding tables. These input values can be obtained from numerical modelling, analysis of water level/discharge time series, and fieldwork.

The outputs from the Hydropeaking Tool are the score of effects factors, the score of vulnerability factors, and the score for the combined assessment (Figure 2).

The Hydropeaking Tool aims at being used to assess existing or planned hydropeaking operations. It also gives the user a possibility to see which parameters have a low score, helping to identify where mitigation should be concentrated.

The Hydropeaking tool is described as a part of deliverable D3.2 of the FITHydro project. Application of the tool is also a part of the deliverable.