Figure 2: Aerial view of the 420kW HYDROSHAFT powerplant at the Loisach River in Großweil, Bavaria. Germany 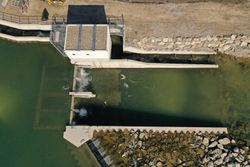 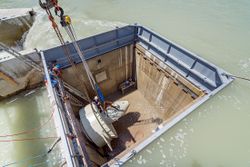 Figure 4: Setting in place of the 420kW turbine. Instead of classical stop-logs a metal shield holds the shaft dry for mounting and revisions 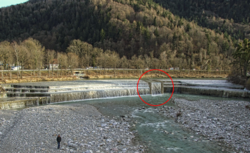 Figure 5: Visualization of the planned 300kW HYDROSHAFT powerplant at the historic Luitpold weir at the Saalach River in Bad-Reichenhall, Bavaria. Germany.

The HYDROSHAFT Powerplant is an innovative, fish-friendly hydropower concept, characterized by a horizontal rack, a submerged Kaplan turbine and a bypass for fish downstream migration immediately at the turbine intake. The hydropwer plant was originally developed to use existing non-gated weirs or ramps for hydropower generation. The HYDROSHAFT powerplant has a very simple geometry, doesn’t require a powerhouse and is therefore hardly visible or audible. It’s advantage for fish protection and ecology are the low velocities at the trash rack, the behavioral barrier through the horizontal fine-rack, the bypass for fish downstream migration and the possibility to pass all sediments over the shaft into the downstream.

The HYDROSHAFT powerplant can use existing weirs or ramps but is also suitable to develop new hydropower at untouched rivers by the so-called multi-shaft concept. In the multi-shaft concept several shafts are combined with a so-called eco-migration corridor for fish and aquatic-sprecies migration. Due to its simple geometry the concept can be standardized and eventually prefabricate. Through the use of one or multiple shafts respectively the concept is scalable from small decentralized units up to large powerplants.

The powerplant has been extensively tested in the Lab of TU Munich in Obernach, where a 35kW pilot was built. Another equally sized pilot is situated at Voith Hydro in Heidenheim, Germany. The first larger powerplant is since February 2020 operational and feeds into the grid. It is located in Großweil, Bavaria, Germany at the Loisach River.

The HYDROSHAFT powerplant was tested in the Lab for its functionality, for the efficiency, for developing a suitable underwater trash-rack cleaner and for testing bypass migration routes and survival rates of fish. As a result of these investigations the following points are mentioned:

Due to the experimentally proven high survival rates the first plant at the Loisach River in a Natura 2000 reserve was possible. Also at the Iller River the highest German administrative court supported the granted water right without amendment. Whereas the first plant at the Loisach River was constructed in a very classical way the efforts are now intensified to lower costs by standardization. The next powerplant at the Iller River, Bavaria, Germany, will already economically work without subsidies. The final goal is to reach a price of about 5 Euro-Cents per KWh.