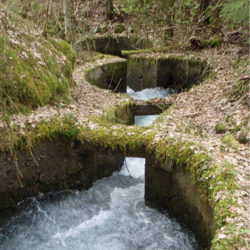 Many fish species migrate in rivers to utilize different habitats at different life stages for spawning, growth and wintering. For many species, migrations are carried out within the same river, while others migrate from their spawning grounds and rearing habitats in rivers to the feeding grounds in the ocean (anadromous behaviour). The European eel displays a catadromous behaviour, with its spawning area located in the Sargasso Sea while they feed along the coasts and in rivers and lakes in Europe. Basically, all fish species show some sort of migratory behaviour or regular movements. In most European rivers and streams there are artificial migratory obstacles and barriers, such as culverts, weirs, dams and power stations. Hydroelectric dams and their tailrace areas represent particular migration challenges. These dams restrict fish migrations and alter the natural habitat for many fish species. This problem is particularly evident for anadromous fishes for which viable populations depend on successful migration from breeding grounds to the ocean and return migrations to spawning grounds. Re-establishment of migration routes is essential to re-introduce or enhance these populations across their distribution areas.

Construction of fish passage facilities is widely used to mitigate migration barriers. The first documented fish passes in the 18th century were simple constructions and likely used as a measure to increase population size and fishing opportunities. Since then, anthropogenic impacts and industrial development have fragmented river systems in most large rivers around the world (Nilsson et al. 2005). Accordingly, artificial fishways have been built, including a variety of designs, from minor rip-rap and blasting works to comprehensive combinations of concrete towers and rock tunnels, the tallest nearly 50 meters high. Unfortunately, extensive research over the last decades suggests that many fishways do not have the desired function (Noonan et al. 2011), and that multidisciplinary and site-specific knowledge is required to reach the best solutions (Williams et al. 2011).

The various measures to mitigate issues concerning Upstream fish migration are listed below.